This image from the dead tree edition of Politico basically says everything there is to say about the relationship between the government and the media: 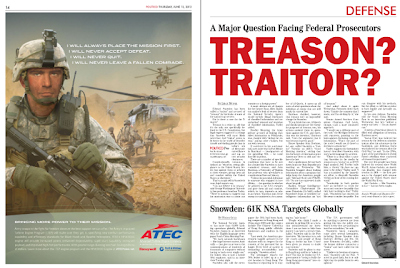 Though I am sure they would claim independence, it is impossible to imagine that the large amount of advertising money Politico receives from ATEC doesn't influence the content. For those not in the know, ATEC is a unit of the US Army responsible for testing and evaluating equipment. So, Politico takes some amount of advertising dollars from a company funded the US Government and then publishes a story that essentially takes the government line on Edward Snowden, namely that he is a traitor. Furthermore, if one looks at Politico's coverage of Snowden, it generally seems to be consistent with the position taken by the US Government.

All in all, this is a great illustration of the second and third filters in Chomsky and Herman's Propaganda Model of the Media.