This one is tough to classify, primarily because it is so bold and shameless. As the video above argues, Tom Donilin, the national security advisor, is unfit for service because of his absence during the events of the killing of several diplomats in Benghazi. The problem with this argument, however, is clearly demonstrated by this picture: 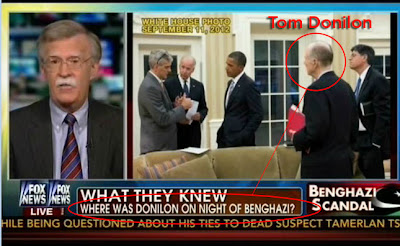 So basically, Fox News ran a story with images that debunked the very story they were trying to tell. This is probably best categorized as Bullshit, which is a from of deception in which the deceiver has no concern for truth or falsity. Basically, all Fox News cares about is attacking President Obama. If he is guilty, great, but even if he is not, they will continue to attack him and just make up charges and accusations in the hope that one of them will stick. Unfortunately, there is some evidence that this is a successful strategy as many Americans seem to operate under the belief that where there is smoke there is fire. The folks at Fox News figure all they need to do is generate enough smoke, even if it is completely make-believe, and the ignorance of the American electorate will do the rest.
Posted by Ian Duckles at 9:56 AM No comments:

Greenwald on Terrorism and Straw Men

In yet another brilliant opinion piece Glenn Greenwald discusses and dissects some of the media responses to the horrific killing of a British soldier in Woolwich. In particular, Greenwald looks at how his own commentary on the killing is straw-manned by his opponents. He also hypothesizes some reasons for why people respond to him in the way they do.

To begin with, the killing in question occurred on May 22 in broad daylight outside a military barrack in Woolwich which is southeast of London. According to eyewitnesses, the victim was hacked to death in broad daylight by two assailants. The victim has since been identified as Drummer Lee Rigby, of the 2nd Battalion The Royal Regiment of Fusiliers. Many in the media and the government have been describing and treating this as an act of terrorism, but Greenwald rightly questions wether such a description is applicable. In particular, he notes that:


...the victim of the violence was a soldier of a nation at war, not a civilian. He was stationed at an army barracks quite close to the attack. The killer made clear that he knew he had attacked a soldier when he said afterward: "this British soldier is an eye for an eye, a tooth for a tooth."

In other words, can attacks on soldiers at military barracks of a nation at war ever be described as terrorism? One of the most common definitions of terrorism involves the idea of attacking civilians to achieve political goals. If we accept this definition, then it is very hard to classify this as an act of terrorism. However, as Greenwald notes, if we broaden the definition of "terrorism" to label this an act of terrorism, then much of what the US and the UK do in the middle east would also fit under that definition as well.


...given that the person killed was not a civilian but a soldier of a nation at war (using US standards), it is difficult to devise a definition of "terrorism" that encompasses this attack while excluding large numbers of recent acts by the US, the UK and many of their allies and partners.

At this point, Greenwald then looks at the way his position is straw-manned (misrepresented and distorted) by others. This discussion is particularly interesting as Greenwald tends to accurately predict when he will be straw-manned by others. Writing in his earlier column he noted:


I know this vital caveat will fall on deaf ears for some, but nothing about this discussion has anything to do with justifiability. An act can be vile, evil, and devoid of justification without being "terrorism": indeed, most of the worst atrocities of the 20th Century, from the Holocaust to the wanton slaughter of Stalin and Pol Pot and the massive destruction of human life in Vietnam, are not typically described as "terrorism". To question whether something qualifies as "terrorism" is not remotely to justify or even mitigate it. That should go without saying, though I know it doesn't.

Greenwald then immediately quotes Andrew Sullivan's comment on this earlier article. This is of interest because Sullivan misrepresents Greenwald's position in exactly the manner Greenwald predicted he would. In his response, Sullivan writes (as quoted by Greenwald):


"How can that legitimize a British citizen's brutal beheading of a fellow British citizen on the streets of London?" He then added: "The idea that this foul, religious bigotry . . . is some kind of legitimate protest against a fast-ending war is just perverse." He concludes with a real flourish: my "blindness to the savagery at the heart of Salafism", he decrees, "is very hard to understand, let alone forgive".

This is a clear and unambiguous misreading and misrepresentation of Greenwald's position, and is as clear an example of a Straw Man as one is likely to find. This, of course, raises the interesting question of how someone could so dramatically misread Greenwald. I, myself, don't have any good answers, but Greenwald has a hypothesis:I think the answer lies in the very first sentence Sullivan wrote when responding to my column:


"I really have to try restrain my anger here." It's an intensely emotional reaction, not a rational one. He, and so many others, are deeply invested on a psychological and personal level in protecting the narrative that Islam is a uniquely violent force in the world, that Muslim extremists pose a threat that nobody else poses, and that the US, the West and its allies (including Israel) are morally superior and more civilized than their adversaries, and their violence is more noble and elevated.

This is an intriguing hypothesis, but as I am not a psychologist, I will leave it to my readers to determine what they think about this interesting and important issue.

I will conclude this post by noting that what Sullivan has done here is a good example of the last two of the five filters in Herman and Chomsky's Propaganda Model of the Media. These are the Flak and Jingoism filters. Flak is criticism aimed by elites (Sullivan) at those who raise questions about the establishment narrative (Greenwald). Jingoism is an unreflective unthinking patriotism that sees everything the US does as good and noble, and everything doen by our opponents (even if it is the same act) as supremely evil and immoral. Both of these filters helpfully explain why Sullivan would produce exactly the sort of article that he did produce in response to Greenwald.
Posted by Ian Duckles at 10:30 AM No comments:

How the Wall Street Journal Thinks about Class 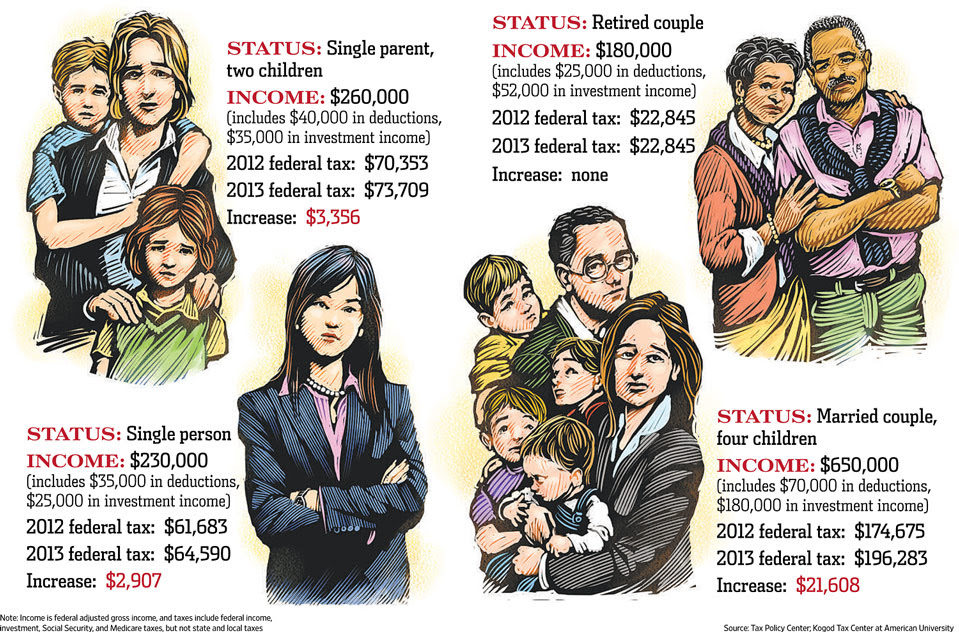 This is an oldie that has been sitting in my draft folder for awhile. With the onset of summer, I finally have some time to comments on it. This comes from a story in the Wall Street Journal at the beginning of 2013 discussing the impact of the American Taxpayer Relief Act. Two aspects of this image really stand out.

First, it is worth noting the income levels of the people described in the image. With the exception of the retired couple making $180,000 dollars a year (putting them in the top quintile of income in America), everyone else in the picture is in the top 5%. So, right off the bat the image is heavily skewed in favor of the richest individuals in America, completely ignoring the impact of the legislation on most people in the US. This is a great example of Cherry Picking and Suppression of Relevant Data in that the Wall Street Journal has chosen to highlight economic situations that would be foreign to most of the people affected by the law. This creates a false impression of the impact of the law, making it appear as if most people will be paying more taxes under the new law (of the four situations described, only the retired  couple sees no increase in taxes).

In addition, notice how unhappy all the people in the image are. I am particular impressed by how upset the single person who makes $230,000 a year is. She is incredibly wealthy (in the top income bracket in the US), and I wonder why she is so unhappy. I guess what the chart really indicates is that money can't buy happiness. Snarkiness aside, this chart is clearly created with a particular ideological agenda, one that is strongly opposed to the tax increases incorporated into the American Taxpayer Relief Act. The key point is that the Wall Street Journal created this chart with a certain political agenda in mind, and the chart is designed (through Cherry Picking and Suppression of Relevant Data) to produce the conclusion the editors want. This is just a nice demonstration of how the media is anything but objective and unbiased.
Posted by Ian Duckles at 8:03 AM No comments: