This is an interesting optical illusion, with a really nice explanation of how it works.

You can find examples of this in the real world, particularly with some of those spinning signs like the one pictured below: 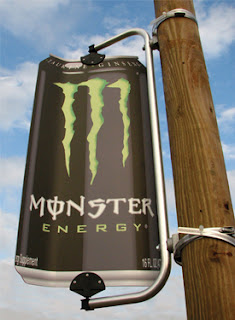 When you see these signs spinning, you can often make it appear to yourself as if the sign is spinning in both directions, much like the spinning dancer illusion above.

Posted by Ian Duckles at 9:23 AM No comments:

Small hands...you know what that means.

The primary race for the 2016 Republican nomination is one of the most bizarre and surreal events American politics has ever seen. The event has gotten so ridiculous that Republicans have started to debate who has the biggest penis. The idea that penis size has any bearing on who should be president is mind-bogglingly stupid, but here we are. Here is a video of Marco Rubio insinuating that Trump has a small penis:

This is an excellent example of an Ad hominem, which is a fallacy in which one substitutes a personal attack for reasoned argument.

Interestingly enough, this claim that Trump has small hands has been around for decades. In fact, it appears that this claim can be traced back to Spy Magazine, a satirical weekly that started publication in the late 1980's.
Posted by Ian Duckles at 11:29 AM No comments:

They separate us from the animals...except for the weasels.

Weasel words are words inserted into a claim that make it weaker than it initially appears. The graphic below gives a number of examples of a favorite weasel words of advertisers: the phrase
"up to." "Up to" is a brilliant weasel word because it can make it sound like there is an incredible sale and one could get a great deal. The first image promises "Mega Reductions" and prominently features "70% off" making it sound like one could save almost 3/4. However, that weaselly "up to" actually reveals that not everything will be 70% off, and that 70% is the absolute most that you could possibly save. Such a claim is compatible with one small item being 70% off and everything else being normal price. If you tried to complain that the store was guilty of false advertising, the owner could easily respond by noting that they didn't promise that everything was 70% off, merely that one could save 'up to' that amount. The same sort of issue applies to all the examples presented below. 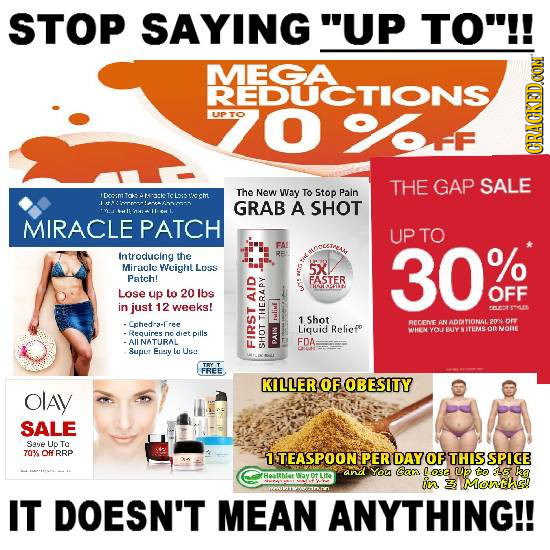 h/t to Angust at cracked.com

Why don't they want you to read the fine print?

Accent or Accentuation is when one changes the meaning of a statement by emphasizing or deemphasizing certain components of that statement. In the image below we see one of the classic uses of accent by advertisers. In each of these images from a TV commercial you can see the very fine print that flashes up at the end of the ad. The advertisers don't want you to see this information, but they are legally required to show it, so the solution is to flash it on the screen in fine print for half a second. Personally, I think advertising laws should be changed so that advertisers are required to present all information in the same font. But, given the influence advertisers and corporations have on the government, such a change seems unlikely. The takeaway: don't believe anything you see in an ad. 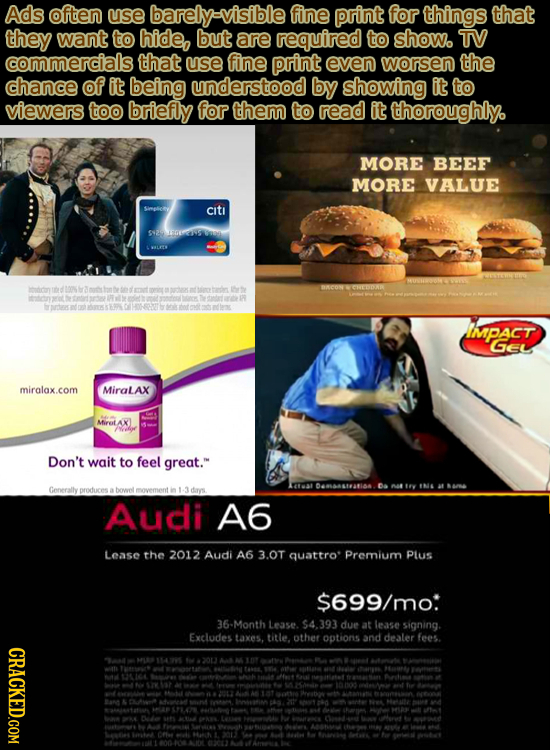 h/t Alexius08 at Cracked.com
Posted by Ian Duckles at 8:24 AM No comments: