This ad for 5-Hour Energy drinks uses a pretty classic advertising technique that shows up in a lot of places (I am pretty sure Trident gum ads used the same trick). This particualr trick is a version of weasel words in which one makes a bold claim, but then inserts words into the claim that make it appear weaker than it initially appears. Here is the ad, after watching it I will deconstruct it:


The key claim is that of 3000 doctors surveyed, 73% would recommend 5-Hour Energy to their patients. The weasel words are that little bit tacked on at the end qualifying that this endorsement is only for a low calorie version of the drink and only, "to their healthy patients who use energy supplements." In other words, 73% of the doctors surveyed think that if you are going to consume an energy supplement, it might as well be a low calorie version. This is, of course, common sense in a country that is seeing increasing problems from overweight and obesity. However, this is in no way a medical endorsement for these product, though clearly the ad is trying to suggest that it is.

Things become even more problematic if we examine the fine print. At the 17-second mark, the fine print reveals that of these 3000 doctors, only 47% (less than half) would recommend 5-Hour Energy. This makes the commercial even more deceptive as the clear implication throughout is that the doctor's are actually looking specifically at this product, when in fact their recommendations seems to apply only to a generic low calorie energy supplement. This is just another in the long list of ways that advertisers seek to manipulate language so as to deceive their customers.

h/t to Cracked.com
Posted by Ian Duckles at 11:27 AM No comments:

Very busy grading this week, but a friend on Facebook posted this nice image that directly relates to discussions about the failures of the Mainstream Media.


As this chart nicely demonstrates, the number of media outlets in the US has been shrinking steadily for decades, and this results in a lack of alternative voices and viewpoints in the media. Those of you who have taken my class (and probably many more) can understand why this is such a big problem.
Posted by Ian Duckles at 1:33 PM No comments:

In a lecture series at Princeton promoting his new book, Supreme Court Justice Antonin Scalia was asked about his opinion on homosexuality. In answering this question, Justice Scalia commits an excellent example of the False Analogy fallacy. This is a fallacy in which one makes a comparison that isn't really apt or appropriate. As reported by the Associated Press, Scalia responded in the following manner:


“It’s a form of argument that I thought you would have known, which is called the ‘reduction to the absurd,’” Scalia told Hosie of San Francisco during the question-and-answer period. “If we cannot have moral feelings against homosexuality, can we have it against murder? Can we have it against other things?”

Regarding the first part of Justice Scalia's comment, I must admit I am a bit confused as to what he is actually claiming. I am familiar with the reductio ad absurdum or reduction to the absurd as a style of argument. It involves showing that commitment to a particular belief or position will ultimately lead one to a contradiction, but I fail to see how it applies in this instance. I guess Justice Scalia is trying to claim that supporting homosexuality generates the contradiction, but I am not sure what the contradiction is or how it is generated by support for homosexuality.

Regarding the second part, here we have a nice example of a False Analogy. Justice Scalia seems to be arguing that there is some sort of equivalence between the bans on murder and homosexuality. I must say, try as hard as I can, I really can't see Justice Scalia's point. As near as I can tell, these two activities have almost nothing in common. One involves the permanent taking of another person's life and the other involves two people having consensual sex. In the question that Scalia poses, it seems that a perfectly reasonable answer would be, "Yes, we can have moral feelings about murder and other stuff." The fact that Justice Scalia seems unable to recognize this difference between laws against homosexuality and murder is deeply disturbing and raises serious questions about the jurisprudence of the Supreme Court of the United States.
Posted by Ian Duckles at 7:25 AM No comments:

Yes, the news hides information from its viewers.

I am feeling a bit lazy today, so I will just repost a nice report from Media Matters for America demonstrating CNN engaging in the Suppression of Relevant Data. As a quick reminder, the suppression of relevant data is a fallacy in which one hides or obscures information that would be relevant to establishing the truth or falsity of the conclusion. So, let's watch the video, then discuss it:


The key suppression of relevant data occurs when Representative Marsha Blackburn (R-TN) says, "the American people have clearly said, we don't want our taxes to go up." As Media Matters notes, when the host, Candy Crowley fails to follow up on this point, she is guilt of the fallacy. Media Matters writes:


On December 6, CNN reported that a majority of Americans support raising taxes on incomes over $250,000 per year as part of a deficit reduction deal.
Furthermore, national exit polling from the 2012 election revealed that six in ten voters favor increasing taxes. That echoed an October 12 Pew Research Center survey finding that 64 percent of Americans support increasing taxes on households making more than $250,000, and a December 2011 survey concluding that 57 percent of Americans feel the wealthy don't pay their fair share of taxes.
The Washington Post, citing a Washington Post-Pew Research Center poll, reported that "nearly 2 to 1" of Americans will blame Republicans, not Obama, if a deal to avoid the automatic tax increases and spending cuts scheduled for January is not reached.

Why the Media hates Ron Paul.

As this video incisively illustrates, the media hates Ron Paul, and they hate him more the more popular he gets with the electorate. As John Stewart notes in the clip, Ron Paul is the original Tea Partier, and given the love shown by the media to the Tea Party it is odd that the intellectual founder of this organization does not get more attention. However, the reason for this disconnect is actually quite clear when we adopt and analyze the situation using the Propaganda Model of the Media developed by Chomsky and Herman in their seminal work, Manufacturing Consent.

In this work, Chomsky and Herman identify five filters that they argue shape media coverage in the US. One of these filters is Flak, which is criticism aimed at the media by popular elites for statements or comments that question the established media narratives. Ron Paul is popular because he raises powerful criticisms about US foreign and domestic policy; criticisms that are completely ignored by the major political leaders in this country and by their opponents. There was literally zero difference between the foreign policies of Barack Obama and Mitt Romney. Since Ron Paul's criticisms fall outside this range of establishment opinion that is tolerated by the Mainstream Media, they must be attacked, and the bearer of these criticisms must be marginalized.

For more on this topic I recommend this excellent article by Glenn Greenwald. 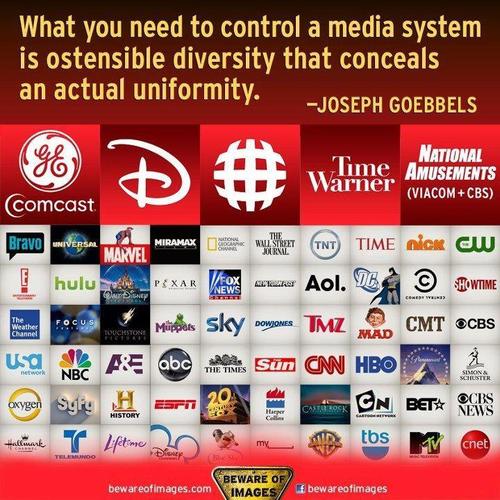 In a recent post on The San Diego Free Press, Jim Miller discusses Herman and Chomsky's Manufacturing Consent: The Political Economy of the Mass Media. One of the main points Herman and Chomsky make is that a major source of the media system we have in the US is a result of increasing consolidation of the news media with fewer and fewer corporations owning more and more of the media outlets in the US. When Herman and Chomsky first published their book in 1988, there were about twelve companies that controlled all the media. As this image nicely summarizes, today that number has shrunk to just five.
Posted by Ian Duckles at 12:30 AM No comments:

Fox News: At It Again

I was very busy the last few weeks with Thanksgiving and then recovering from Thanksgiving so I haven't had a chance to post. As my critical thinking classes transition into a discussion of the media, I am going to try and post more media related posts in the upcoming days.

I want to begin by looking at a post by MediaMatters discussing one of the latest atrocities committed by Fox News. The following interview with J. Christian Adams on Fox and Friends from December 1 concerns a report recently issued by the Government Accountable Office on the feasibility of relocating detainees from the Guantanamo facility in Cuba to the US. The report (PDF) basically says that the US does have sufficiently secure prisons to house these detainees if it so chooses. Needless to say, this report is seen as an enormous threat by Fox, and Adams, through the use of a number of fallacies, tries to argue that this report is actually evidence of a grand conspiracy to smuggle terrorists into the US so that they can be released onto American streets (for what reason is never made clear, something to do with Obama being a Muslim, but nothing more detailed than that). Let's take a look at the video, and I will then discuss some of the major fallacies that it commits.


Perhaps the most obvious fallacy comes at the end when Adams suggests that:


I think the long-term plan here is to integrate them into the regular prison population where they can radicalize the other prisoners. And eventually, these people -- some in the administration -- want to just release them into the United States.

This is a clear an unambiguous example of a Straw Man. There is literally not a single person in the entire US who thinks that terrorists should just be released into the United States, so for Adam to claim otherwise is to just invent a position that has no relation to reality in order to scare and frighten people.

A second major fallacy is the Suppression of Relevant Data that occurs during Adam's discussion of the Uighurs. For some quick background, the Uighurs are Chinese Muslims who were picked up by the US during the early years of the war on terror. These individuals (15 in total) were determined to pose no threat to the US or its citizens, and in 2003 were scheduled for release from Guantanamo. This 2005 story from the Washington Post nicely summarizes their plight:


In late 2003, the Pentagon quietly decided that 15 Chinese Muslims detained at the military prison in Guantanamo Bay, Cuba, could be released. Five were people who were in the wrong place at the wrong time, some of them picked up by Pakistani bounty hunters for U.S. payoffs. The other 10 were deemed low-risk detainees whose enemy was China's communist government -- not the United States, according to senior U.S. officials.

For Adams to describe these individuals as "terrorists" is extremely misleading, and really does a disservice to viewers of Fox News by withholding important information about the case from them. This is because if Adams were to accurately explain what is going on, he wouldn't be able to engage in the scaremongering he does, and Fox News would have one less way to attack and criticize the Obama administration.