More Gold from the Surveillance Scandal

The revelations of the scope of the Surveillance State keep coming from Glenn Greenwald. This time the subject is the aptly named "Boundless Informant" program. This is a program that maps and details by country the amount of data that has been scooped up by the NSA. Of particular interest is the following picture and that bright yellow country on the left. 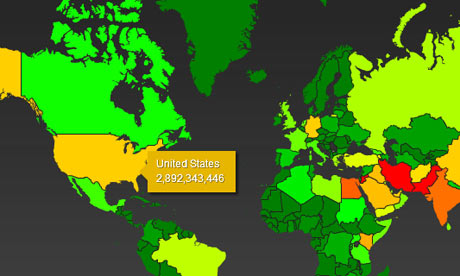 As with many of these stories, while the revelations are important and worth discussing, I want to focus on the responses. At the end of the Greenwald article cited above Greenwald quotes from Judith Emmel, an NSA spokeswoman interviewed by the Guardian. My favorite comment is her last one:


She added: "The continued publication of these allegations about highly classified issues, and other information taken out of context, makes it impossible to conduct a reasonable discussion on the merits of these programs."

I find this to be an incredible example of doublespeak.  Basically, Emmel is claiming that the disclosure of the existence of these programs interferes with our ability to reasonably discuss these programs. If we think about this for a second, we can see that this is a clear Non Sequitur that completely Misses the Point. How can we have a reasonable discussion on the merits of programs that are hidden from us and which we don't know exist? If Emmel (and President Obama as discussed in a previous post) were genuinely interested in having a reasonable discussion of this issue, they would welcome these disclosures.

In fact, it is as a result of these disclosures by the heroic whistle-blowing of Edward Snowden that we are finally actually having a discussion about the surveillance state. I realize that Emmel and President Obama would prefer the general population to remain ignorant, and that the NSA would just prefer to do whatever it wants without any oversight or "interference," but, at the risk of repeating myself, this is supposed to be a democracy, and a democracy can only function effectively when the populace is well-informed about what the government is up to. This is why people like Snowden (and Bradley Manning and Julian Assange and Daniel Ellsberg) are heroes; they were willing to sacrifice themselves and risk their lives to further freedom and democracy.
Posted by Ian Duckles at 2:00 AM