Round and Round It Goes. Where It Stops, Nobody Knows.

Apropos of the stunning, but ultimately not very surprising, revelations of the scope of government spying on innocent citizens, I present this Tom Tomorrow cartoon from over a year ago, which nicely summarizes and anticipates many of the responses we have heard and can continue to expect to hear from President Obama and various other security state apologists: 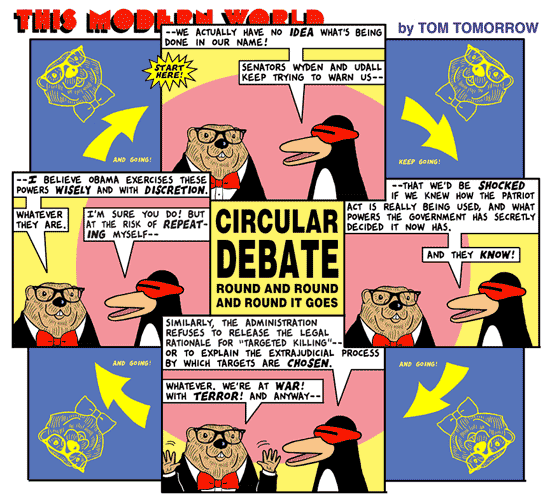 As illustrated, this is a nice example of a Circular Argument. That is, an argument in which the conclusion is stated or assumed in one of the premises. This particular argument is one that really bothers me as I don't understand how someone can defend something they don't know anything about. Those who defend Obama's expansion of the security state are really like ostriches with their heads buried in the sand (I know ostriches don't really do this, but it is too good a metaphor to let factual considerations get in the way). If one doesn't know what is happening, then one can't defend it.

Furthermore, the appeal to terrorism (a sub-category of the Appeal to Emotion) begins to make less and less sense when one realizes that, from the perspective of the US government, every single man, woman, and child in the US is a potential terrorist. If the state really is genuinely afraid of every one of its citizens, then we need to seriously rethink what we mean by democracy and what we mean when we call ourselves one.

UPDATE: I just realized that I blogged about this topic over a year ago. That post can be found here.
Posted by Ian Duckles at 7:11 AM