In the eye of the beholder

One of the coolest things about optical illusions is what they reveal about how human perception works. One of my favorite optical illusions in this respect is the Checkershadow illusion discovered and analyzed by Edward H. Adelson in 1995. Here is the illusion: 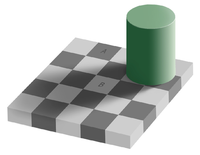 The trick here is to look at squares A and B. B obviously appears to be a much lighter shade of gray than A. However, if we isolate the two squares from the larger context, we can actually see that they are the same shade of gray. This gif below the jump illustrates that point:

As you can see, the two squares are actually the same shade of gray, but look different when placed into the larger context of the illusion. So, what is actually going on here? The quick answer is that our brain interprets the image as three dimensional, and it corrects the lighting vector to reflect that interpretation. When we take the squares out of their original context, our brains no longer interpret the image as three dimensional, so they don't auto-correct the lighting for us and  we can see that he two squares are the same shade of gray.


As with many so-called illusions, this effect really demonstrates the success rather than the failure of the visual system. The visual system is not very good at being a physical light meter, but that is not its purpose. The important task is to break the image information down into meaningful components, and thereby perceive the nature of the objects in view.

So, the reason the illusion fools us is not because our visual system is defective, but because our visual system has not evolved to be a photometer, but has instead evolved to give us the information we need to navigate our environment. This again demonstrates that our perception of the world is not a direct copy or image of reality, but is instead constructed by our brains to serve specific purposes for whihc the brain and those perceptual systems have evolved. This is why we always need to be suspicious of eye-witness reports and our own direct perception. Even when our visual system is functioning perfectly, it can still systematically succumb to these perceptual illusion.

For more interesting illusions and explanations of them, visit this link.
The image and the .gif comes from Wikipedia.

Update: And here is a really cool video demonstrating this illusion: