Don't go chasing waterfalls. You just run around in circles.

Most people are familiar with this very famous optical illusion designed by M.C. Escher: 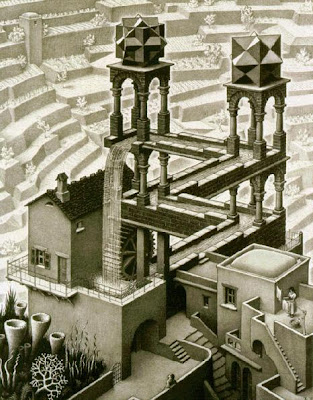 Despite the fact that this illusion has its origins in the exploitation of rules of perspective in drawing, it turns out that one can actually build such an object in the real world! A video is below the jump.


Now this explains how the object is constructed, but it still doesn't explain how the water can be poured in such a way that it appears to flow uphill. In researching this online I couldn't find an explanation beyond the use of computer graphics. If anyone knows how this works, I would love to hear about it in comments.

However the illusion is accomplished, it reveals more important evidence that our visual systems construct an image of the world, rather than directly copying what we actually see. By exploiting this knowledge we can then create really interesting and provocative illusions. However, this knowledge can also be used to deceive and confuse people. As critical thinkers we need to be aware of this, so that we can avoid being deceived.