For those not in the know, an Oxford comma (also called a serial comma) is a comma placed before a coordinating conjunction in a list. For example:


He went to the grocery store, the bank, and the mall.

The Oxford comma is a stylistic choice, but it is one that I am fond of because it helps eliminate ambiguity. For example: 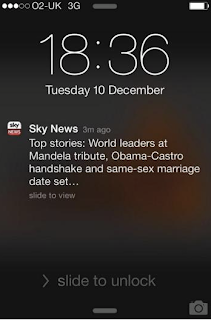 In this screenshot, the information from Sky News lacks the Oxford comma, and ends up being guilty of amphiboly by making it sound as if Obama and Castro have set the date for their same-sex marriage. Without the comma the sentence is ambiguous and can be interpreted in several ways. With the inclusion of an Oxford comma the sentence would read as follows:

h/t to George Takei
Posted by Ian Duckles at 1:00 AM