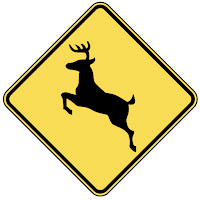 Kathleen O'Brian Wilhelm is a blogger for a news site that covers news in the samll town of Avon Lake, Ohio. One of her recent posts is so dumb and fallacy-ridden that at first I thought it must be a joke. As near as I can tell, it is not. Her post begins with the following:


Signs that read “Deer Crossing” and the like are going to continue to pop up throughout our country including Avon Lake, but who are these signs for? Deer cannot read, do not obey the law and probably will cross where they wish. Although adorable companions, it is hard to remember the last time that the news reported an animal talking, thinking or providing significant input for the benefit of society. Yet, these signs cost taxpayers like so much of government.

Yes, you read that correctly and this is not a joke. Wilhelm is objecting to "Deer Crossing" signs on the grounds that she sees no point in them because deer can't read. Aside from asinine stupidity, this is also a nice example of the Fallacy of Missing the Point. Wilhelm seems oddly ignorant of the fact that such signs are not there for the benefit of the deer, but for the benefit of drivers who should take special care to avoid hitting a deer (for those unfamiliar, deer are very heavy and basic physics tells us that if you hit a deer going at even a moderate speed you will total your car and likely seriously injure yourself in addition to killing the deer). That Wilhelm seems to ignore this obvious point is...bizarre.

However, the bizarreness continues. A bit later Wilhelm writes:


They are on this earth like trees to make humans’ lives better. As humans we must be kind to them, eat them when hungry, feed them when they are, but remember they are here to enhance our lives.

In this passage she makes a pretty big unargued assumption about the role of animals. I assume this belief is a product of her religious background, but it is really Begging the Question to just assert this without providing any justification for it.


Besides, it appears that this gesture of kindness to animals does not extend human to human. This President’s  Obamacare appears to welcome abortion of innocent babies. It is painful to think that there are those who  cry for seals while Obamacare  never blinks an eye at abortion.

The movie from a discussion of animals to a discussion of abortion coverage under the Affordable Care Act makes no sense, and one doesn't really have anything to do with the other. This is a classic example of a non sequitur as the comments about abortion do not follow from the earlier comments about our duties and responsibilities towards animals.

Upon first reading this article, I was fairly disturbed and disappointed that someone could get away with writing something so obviously moronic and ill-conceived, but much of my faith in humanity was restored by reading the comments. It appears that Wilhelm's readers, at least, are much more intelligent than her.

h/t to Pharyngula
Posted by Ian Duckles at 9:11 AM