Fox News continues to use misleading images to mislead and deceive its viewers. A latest example, identified by Media Matters, is the following: 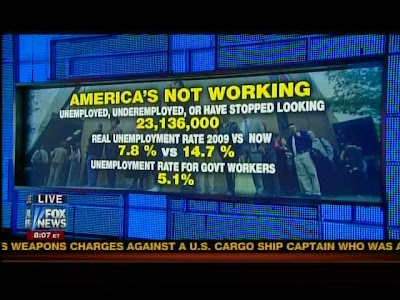 The misleading aspect of this image is that the numbers used to compare the unemployment rate in in 2009 vs. the present day were not derived in the same way. The 7.8% number is the official unemployment rate which represents the percentage of unemployed people who are actively looking for a job. By contrast, the 14.7% figure is the real unemployment rate and also includes people who have stopped looking for work and part-timers who would like a full-time job. By taking two numbers that were calculated using different methodologies and then pretending that they are actually the same, Fox is able to make it appear as if unemployment has almost doubled under the Obama administration. This is an example of a False Analogy (because they are comparing two things that aren't really comparable) and Suppression of Relevant Data (because we are not being told the truth about these numbers and how they are calculated).

In fairness to Fox, they did issue a correction, noting that the number that should have been used for the real unemployment rate in January 2009 was 14.2%.
Posted by Ian Duckles at 10:48 AM