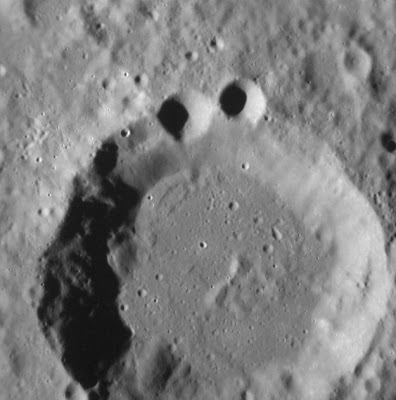 NASA has just released a photo of a crater on the surface of Mercury taken by the Messenger spacecraft. The image is of a large impact crater with two smaller impact craters that occurred later. The "googly eye" effect is a product of luck in that the image was taken when the shadows were positioned to produce what look like eyeballs. This is, of course, a great example of pareidolia; the psychological phenomenon in which vague or meaningless data are interpreted as meaningful. In this case, the image of a bunch of craters produce the impression of Cookie Monster in the eye of the viewer.

Email ThisBlogThis!Share to TwitterShare to FacebookShare to Pinterest
Labels: pareidolia