An ad baculum from a rich asshole

An Ad Baculum is a version of the appeal to emotion, and it is a fallacy in which one substitutes a threat of force for an actual argument. One might imagine that such a fallacy is uncommon because a brute threat seems like such an obvious error to recognize. Nevertheless, an excellent example of this fallacy can be found in an email that this man, David Siegal, billionaire owner of the massive timeshare company Westgate Resorts, sent to his employees. 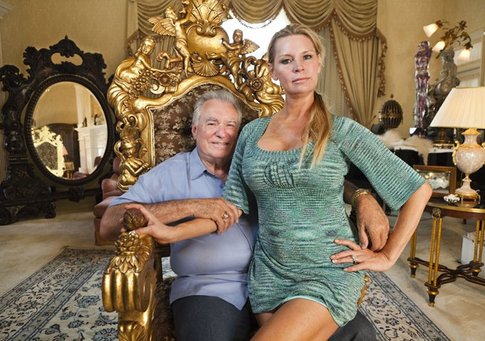 In the email, Siegal threatens his employees with a loss of their jobs if they fail to elect Mitt Romney president of the US. Siegal writes:


As most of you know our company, Westgate Resorts, has continued to succeed in spite of a very dismal economy. There is no question that the economy has changed for the worse and we have not seen any improvement over the past four years. In spite of all of the challenges we have faced, the good news is this: The economy doesn’t currently pose a threat to your job. What does threaten your job however, is another 4 years of the same Presidential administration. Of course, as your employer, I can’t tell you whom to vote for, and I certainly wouldn’t interfere with your right to vote for whomever you choose. In fact, I encourage you to vote for whomever you think will serve your interests the best. [Emphasis added]

This is about as clear a threat as one could imagine. Siegal then concludes the email by writing:


So where am I going with all this? It's quite simple. If any new taxes are levied on me, or my company, as our current President plans, I will have no choice but to reduce the size of this company. Rather than grow this company I will be forced to cut back. This means fewer jobs, less benefits and certainly less opportunity for everyone.
[...]

You see, I can no longer support a system that penalizes the productive and gives to the unproductive. My motivation to work and to provide jobs will be destroyed, and with it, so will your opportunities. If that happens, you can find me in the Caribbean sitting on the beach, under a palm tree, retired, and with no employees to worry about. [Emphasis added]

Leaving aside the absurdity of someone actually claiming that a slight increase in the top marginal tax rate will have any effect on whether or not that person continues to work (if Siegal wanted to retire he could, he already has lots of money and doesn't need to work), the general Ad Baculum in this email should be obvious, and in fact the whole point of the email was to threaten his employees to vote a certain way. In fact, Siegal has employed similar tactics in the past. As Gawker notes:


The Florida-based Westgate Resorts is not a public company. It is the domain of David Siegel, a staunch Republican. In fact, Siegel has publicly claimed credit for George W. Bush defeating Al Gore, saying "I had my managers do a survey on every employee [8,000 total]. If they liked Bush, we made them register to vote. But not if they liked Gore."

So, once again we see wealthy individuals exploiting that wealth in an effort to sway elections in directions that they think will be beneficial to them, often using underhanded and deceptive tactics to do so.

Email ThisBlogThis!Share to TwitterShare to FacebookShare to Pinterest
Labels: appeal to emotion, appeal to force