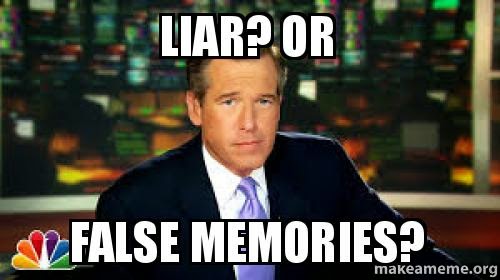 If you have been paying attention to the news lately, you can't help hearing about disgraced former (for now, depending on the ratings of his replacement he might return) NBC Nightly News Anchor Brian Williams.  Williams got into trouble for claims he made about an incident that occurred in 2003 during the US invasion of Iraq. In particular, Williams claimed that he was in a helicopter that was hit by an RPG and forced into an emergency landing. Williams then claimed that he and the crew had to defend themselves against enemy fire untill the calvary in the form of the US military came and rescued them. Here is what Williams told David Letterman on The Late Show in 2013:


We were in some helicopters. What we didn’t know was, we were north of the invasion. We were the northernmost Americans in Iraq. We were going to drop some bridge portions across the Euphrates so the Third Infantry could cross on them. Two of the four helicopters were hit, by ground fire, including the one I was in, RPG and AK-47. [Emphasis Added]

Interestingly enough, this was not the version that Williams first told back in 2003. According to transcripts from NBC, in 2003 Williams characterized his experience as follows:


We quickly make our drop and then turn southwest. Suddenly, without knowing why, we learned we’ve been ordered to land in the desert. On the ground, we learn the Chinook ahead of us was almost blown out of the sky. That hole was made by a rocket-propelled grenade, or RPG, fired from the ground. It punched cleanly through the skin of the ship, but amazingly it didn’t detonate. Though the chopper pilots are too shaken to let us interview them, we learned they were shot at by some of those waving civilians, one of whom emerged from under a tarp on a pick-up truck like this one and shot the grenade. We meet a unit from the 3rd Infantry called in, as it turns out, to protect us from the enemy which they say doesn’t look like the enemy. [Emphasis Added]

So, in 2003 it was one of the lead choppers ahead of Williams that was shot down, but a decade letter Williams was claiming that he was on the copter that was shot down. What's the deal? According to many in the media, the answer is obvious, Williams is a liar.

While this might seem like a reasonable conclusion, a little critical thinking reveals some serious problems with this interpretation. The most obvious being, why would someone lie about something that could so easily be corroborated? This is not some random nobody claiming war experience that he didn't have, this is a major public figure who has regularly appeared on national television for over two decades. Furthermore, why would he have told the story on national television one way in 2003 and then in a completely different way ten years later? If it really was a lie it appears to have been a pretty dumb one.

In my opinion, I don't think Williams lied. Instead, I think he misremembered. This may sound like an excuse, but if we look at the science of memory, we quickly realize that the misremembering hypothesis is far more reasonable than the lying hypothesis. The Yale neuroscientist Dr. Steven Novella reaches this same conclusion in a recent blog post. He argues that given what we know about how fallible human memory is, the far more likely conclusion is that Williams was misremembering. As Dr. Novella puts it:


While I do not know what Williams remembered, it is wrong and naive to assume he is lying. Williams was likely betrayed by his memory. It is reasonable to argue that, as a journalist, he should have rechecked earlier documentation of the event rather than relying upon his memory. That is a lesson hard won.
Williams probably assumed that his memory was accurate. He may have been falsely reassured by the clarity of his memory, which is not a good predictor of veracity. He thought he was “going crazy,” but he is just suffering from a typical fallible human memory.

Similarly, on a recent episode of the Skeptics Guide to the Universe podcast, Dr. Novella went into the subject in a bit more detail.


We tend to fuse memories; we confuse details; we also tend to personalize memories, meaning we’ll take a memory of something that happened to someone else and over time we will remember it as happening to us.

Given all of this, it seems much more reasonable to conclude that Williams misremembered rather than lied.
Posted by Ian Duckles at 11:42 AM

Email ThisBlogThis!Share to TwitterShare to FacebookShare to Pinterest
Labels: memory