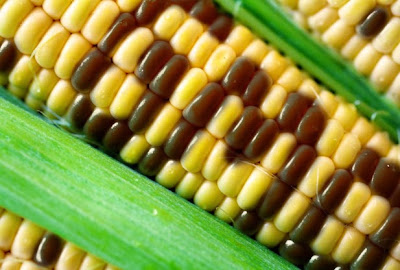 If you honestly follow the debate surrounding Genetically Modified foods you will find that it is extremely difficult to find accurate, unbiased information on the subject. For every reputable article discussing the dangers of GM foods and the destruction they will wreak on the planet you will find an equally reputable article explaining how safe these foods are and the promises they hold for the future of humanity. As I am not a scientist, I won't take stand here on this issue (I have my views), but as a philosopher, I do feel quite qualified to look at some fallacious reasoning surrounding this issue.

The following quotation comes from an article written by Anna Lappe responding to a lengthy series of articles published over 6 months by Nathanael Johnson at Grist. For what it is worth, I think Lappe's response slightly misses the mark and doesn't really engage substantively with Johnson's claims, but that is neither here nor there. Instead, I want to focus on the following paragraph:

Consider Monsanto and Dow’s chemical 2,4-D used in an herbicide concoction called Agent Orange during the Vietnam War, which caused untold cancers, birth defects, and other serious illnesses among Vietnamese and veterans. (And the companies are now pushing the chemical again through corn and soybean seeds engineered to be resistant to, and therefore used with, 2,4-D.)

This paragraph is presented as evidence that Monsanto and Dow "are chemical companies with long histories of failures to protect human and ecosystem health—with tragic consequences." This is an example of the Genetic Fallacy in which one argues that an idea or concept (in this case GMO foods) is bad because the source of that idea or concept is bad or has done bad things in the past. Just because Dow and Monsanto produced chemical weapons for the US government does not mean that GMO foods are equally bad. Lots of companies are involved in a a variety of different industries. The fact that General Electric is a defense contractor does not mean that your GE coffeemaker is out to kill you.


More significantly, the above passage is also guilty of the fallacy of Division. This is a fallacy in which you erroneously derive a conclusion about the parts based on attributes of the whole. A simple example would be, "This machine is heavy. Therefore every part of this machine is heavy." The fallacious reasoning here should be obvious. Just because a machine has a certain weight does not mean that every part will have the same weight. It is easy to imagine a machine made up of a billion pieces, each of which weighs an ounce. Each piece is light, but when you add them together you get something quite heavy. In the passage above, Lappe is arguing that because Agent Orange is bad, every chemical component of Agent Orange is also bad. Now Agent Orange (WARNING: there are some gross images at the link) is certainly a nasty product, but if one reads the linked Wikipedia page, one finds that most of the concern is not with chemical 2,4-D, but with the other component of Agent Orange, chemical 2,4,5-T. Now I don't know anything about chemical 2,4-D beyond what I read at Wikipedia, but the key issue here is that one cannot legitimately argue that because a substance is bad, every component of that substance is also bad. To do so, as Lappe, does is to commit the fallacy of division. And it is because of stuff like this that it is so difficult to figure out the truth about GMO's.
Posted by Ian Duckles at 11:19 AM