The family I can understand, but the dog?

This should make for an interesting article: 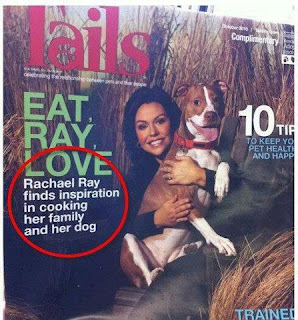 Amphiboly or Amphibology is another one of the errors first identified by Aristotle in his Sophistical Refutations.  This is an error in which the grammatical structure of a sentence allows for multiple interpretations. In the example above, the headline writers clearly intend to say that Rachael Ray finds inspiration in three different things: cooking, her family, and her dog. However, as the headline is written it appears that the source of Ms. Ray's inspiration is cooking her family and dog!

Newspaper and magazine headlines are often an excellent source for examples of this error in that these writers are attempting to cram a great deal of information in a great deal of space, and this often leads to ambiguous grammatical constructions.

Another common mistake in newspaper headlines is Equivocation in which one uses a word that has multiple denotations and it isn't clear which denotation is meant. Sometimes, as in the example above these are clearly accidents, but in other cases one suspects that the headline writer is intentionally deploying this kind of ambiguity in order to draw the readers attention. I hope that is what was going on here: 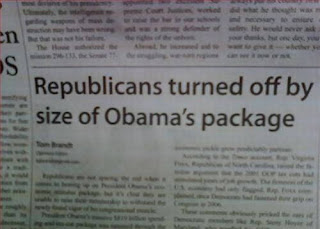